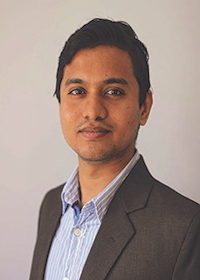 Sai Manoj Pudukotai Dinakarrao, an assistant professor in Department of Electrical and Computer Engineering, received a BTech degree in electronics and communication engineering from the Jawaharlal Nehru Technological University, Anantapur, India, in 2010; a MTech in information technology with a specialization in networking and communication from International Institute of Information Technology Bangalore, India, in 2012; and PhD degree in electrical engineering from the Nanyang Technological University, Singapore in 2015. He worked as post-doctoral researcher at TU Wien in Vienna, Austria, between 2015 and 2017. He worked as post-doctoral researcher and research assistant professor at George Mason University during 2017 and 2018.