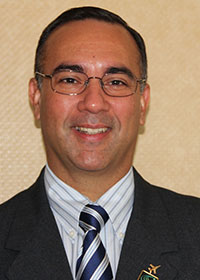 Paulo Costa has applied his significant experience as a fighter pilot to a career specializing in the field of electronic warfare and flight safety, which in conjunction with his research on probabilistic reasoning has led to applications in cyber and transportation security, heterogeneous data fusion, and decision support systems in healthcare, defense, and other areas. These topics are at the core of his classroom activities at both graduate and undergraduate level, as well as his research path. Costa leads the research of graduate-level students in understanding security objectives and verification protocols, bringing in the science of probabilistic reasoning and challenging PhD level candidates to consider theory and methods for building computationally efficient software agents that reason, act, and learn in environments characterized by noisy and chaotic traffic.

Costa is a key researcher in the field of probabilistic ontologies and developed innovative applications and extensions that aid in the fight of cyber-warfare. He is a Co-Director at Masons’s Radio and Radar Engineering Lab, and Director for International Collaborations at the Center of Excellence in C4I&Cyber. He received his MS and PhD from George Mason University.