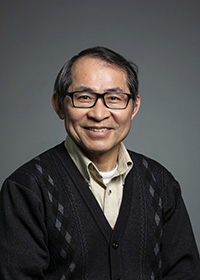 Professor K.C. Chang is a recognized expert in data fusion and Bayesian network technologies. In the past thirty years, he has conducted research on a wide range of distributed data fusion and probabilistic reasoning problems. His recent research projects include Office of Naval Research (ONR) Distributed Fusion in Sensor Networks with Information Genealogy, National Science Foundation (NSF) Collaborative Decision Processing for Dynamic Spectrum Access in Programmable Wireless Networks, Army Research Office (ARO) Distributed Fusion with Copula, and Air Force Office of Scientific Research (AFOSR) Decision under Uncertainty for Satellite Communication.  He has also worked on applying data fusion and probabilistic reasoning techniques to financial engineering applications.  He is the Director of the Sensor Fusion Lab at George Mason University and the coordinator of the Financial Engineering Program at GMU.

Dr. Chang received his MS and PhD degrees in Electrical Engineering from the University of Connecticut in 1983 and 1986, respectively. From 1983 to 1992, he was a senior research scientist in Booz-Allen & Hamilton. In 1992, he joined the Systems Engineering and Operations Research department of George Mason University, where he is currently a professor. He has published more than two hundreds papers in the areas of multi-target tracking, distributed sensor fusion, Bayesian networks technologies, and financial engineering applications. He was the Editor on Tracking/Navigation Systems of IEEE Transactions on Aerospace and Electronic Systems from 1993 to 1996, and the Editor on Large Scale Systems of the same transaction from 1996 to 2006. He was also an Associate Editor of IEEE Transactions on Systems, Man, and Cybernetics from 2002 to 2007. He was the Technical Program Co-Chair of the 2009 International Conference on Information Fusion, Seattle, USA.

Dr. Chang was elected as an IEEE Fellow for his contribution on “sensor data fusion and Bayesian probabilistic inference” in 2010.