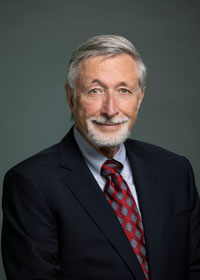 Alexander H. Levis is University Professor of Electrical, Computer and Systems Engineering. From 2001 to 2004 he served as the Chief Scientist of the U. S. Air Force at the Pentagon on leave from the university. He was educated at Ripon College where he received the AB degree (1963) in Mathematics and Physics and then at MIT where he received the BS (1963), MS (1965), ME (1967), and Sc.D. (1968) degrees in Mechanical Engineering with control systems as his area of specialization.

Dr. Levis is a Life Fellow of the Institute of Electrical and Electronic Engineers (IEEE) and past president of the IEEE Control Systems Society; a Fellow of the American Association for the Advancement of Science (AAAS), a Fellow of the International Council on Systems Engineering (INCOSE), and an Associate Fellow of the American Institute of Aeronautics and Astronautics (AIAA). He has served on the Advanced Technology Board of the Office of the Director of National Intelligence, the NASA Advisory Council, the Homeland Security Science and Technology Advisory Committee, the IEEE Ramo Medal committee and on the scientific advisory board of the Institute of Human and Machine Cognition. ). He also served for many years on a panel of the USSTRATCOM Senior Advisory Group, the Board of Directors of the Educational Foundation of AFCEA and the Systems Engineering Advisory Board of the US Military Academy. He has received three times the Exceptional Civilian Service medal from the Air Force (1994, 2001, 2004) and the Meritorious Civilian Service medal (2008) for contributions as a member of the Air Force Scientific Advisory Board and as Chief Scientist. He has also received the Air Force Chief’s Medallion and the Third Millennium medal from IEEE. In 2005 he received the Enduring Achievement award from the C2 Research Program of the Office of the Assistant Secretary of Defense (NII) and in 2008 the Distinguished Alumnus Citation from Ripon College. He taught at the Polytechnic Institute of Brooklyn (1968-73), headed the systems research department at Systems Control, Inc. in Palo Alto, California (1973-79), was a senior research scientist at the Laboratory for Information and Decision Systems at MIT (1979-1990), and moved to George Mason University in 1990 where he served two terms as department chair for Systems Engineering.

He is teaching courses on architecture-based systems engineering design. His research as focused on defense systems with focus on command and control architectures, modeling and simulation of socio-technical systems,

He has over 290 publications documenting his research, including the three volume set that he co-edited on "The Science of Command and Control", published by AFCEA, and

the "The Limitless Sky: Air Force Science and Technology contributions to the Nation," published by the Air Force.

2018 - 2021: Escalation Management in the Gray Zone. Funded by the DoD Minerva Research Initative.