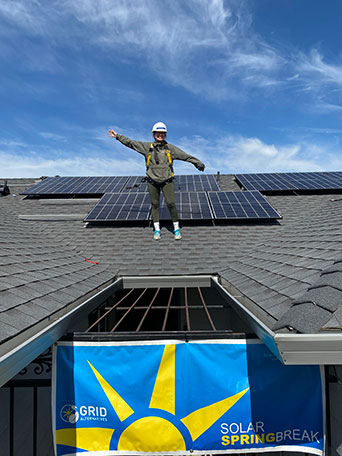 Mellany Oña Ayala hopes to one day be the driving force behind sustainable energy, and as a junior mechanical engineering major, she has already found her momentum.

Looking at the crux where engineering, the environment, and communities intersect, Ayala knows how critical sustainability is for the future of our earth. “I love the environment. It affects so many parts of our lives,” she says.

Her enthusiasm for the environment inspired her to lead 10 fellow Mason students, in partnership with a non-profit called GRID Alternatives, on an alternative spring break in spring 2020. “GRID Alternatives has a program called Solar Spring Break,” says Ayala. “So, to participate, we raised money that went to installing solar panels in two low-income homes in Sacramento, California, and we spent the break installing them.”

The benefits of their work were twofold—they helped families save money on electricity, and they transitioned two homes to a more sustainable power source. “Experiences like these encouraged me more to want to pursue sustainable energy,” says Ayala, who is also a first-generation college student.

Ayala and her family immigrated from Ecuador when she was three, and while Ayala sees the difference in structures and architecture between states, countries, and continents, she says  “The environment is everything, wherever you go or travel, it is all the same. And that is why it needs our protection.”

Ayala’s fierce drive to protect the environment emerged when she was young. “My family and I always did things outdoors. We would go on hikes, go to the beach, national parks, or regional parks to have a barbecue and play soccer or volleyball,” she says. “And I loved that, and my passion grew from there.”

In addition to her concern for the environment, Ayala strives to make a difference in the lives of her fellow students at Mason. Currently, she serves as the secretary for Mason’s Society of Professional Engineers (SHPE) student chapter. “I discovered SHPE freshmen year when I met the president at the time. I started going to meetings and I discovered that the people who run SHPE really dedicate themselves to the organization and helping the people in it, and I wanted to be a part of that,” she says.

Once she graduates, Ayala hopes to work as a wind energy engineer and to continue showing others the power of sustainable energy. “I’m so amazed as to how we can produce energy for so many people, and the wind is such a powerful force,” she says. “More people should know how great wind and solar energy are.”